Over a career in which I’ve worked on both sides of the fence, as a tech PR Specialist and a tech journalist, I’ve become fascinated with the tech media. While working in the industry, I recognized how little the creation of the tech agenda is being studied or taught.

Moving to academia, my ultimate goal is to fill the gap by applying my tech background and experience to research the various forces shaping the tech discourse.

My studies are dealing with 1. the intersection of technological innovations, journalism, and PR in general. 2. the creation of the tech media agenda in particular.

- How is technology being covered and criticized?
- Who sets the tech agenda?
- The shift in tech coverage and the rising Techlash (tech-backlash). Consequently: How are big tech companies and their strategic communication efforts respond to the mounting criticism?

In the new era of reckoning regarding tech's ramification on society, those examinations are even more crucial. I'm addressing them as both a researcher and an educator. 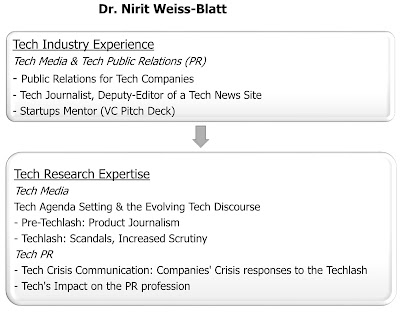 Completion of M.A Thesis (2009-2010)
The University of Haifa, The Faculty of Social Sciences, The Department of Communication. Supervisor: Prof. Sheizaf Rafaeli.

Dissertation: "Agenda-Setting, Two-Step Flow and Tech Blogs: The Role of Tech Bloggers in the Flow of Information."

The study dealt with two "old" mass communication theories – agenda setting and the two-step flow of communication - in light of the new media era. The research was pioneering in its advancing of those theories from the classical political field to the tech field.

Who Sets the Tech Agenda?

Due to the emerging rise of tech blogs in the news coverage of innovation (in the mid-2000s), the dissertation aimed to examine whether the traditional media's role in dictating the topics for discussion also preserved in tech news.

This comprehensive study on the tech coverage also captured the state of tech journalism back in 2012. In the pre-techlash era, tech media outlets published more positive coverage than negative to encourage innovation. Tech companies were used to the "cheerleading" of product launches, which I described as "Product Journalism." This favorable coverage hardly addressed tech's broader impact on society. Now, it is the most debated issue.

Post-doc at USC Annenberg School for Communication and Journalism


A visiting research fellow at the University of Southern California.

The first year of post-doc was in M{2e} – Media, Economics and Entrepreneurship program.
The second and third years are in CPR - The Center for Public Relations.

Tech News & Tech PR in Light of the New "Techlash"

Despite the growing importance of the tech coverage, there has been a lack of theoretical and empirical work on the interplay between tech journalism and tech PR in general, and in light of the new techlash in particular.

We gathered a full year of tech coverage and tech PR responses and finished analyzing the data. 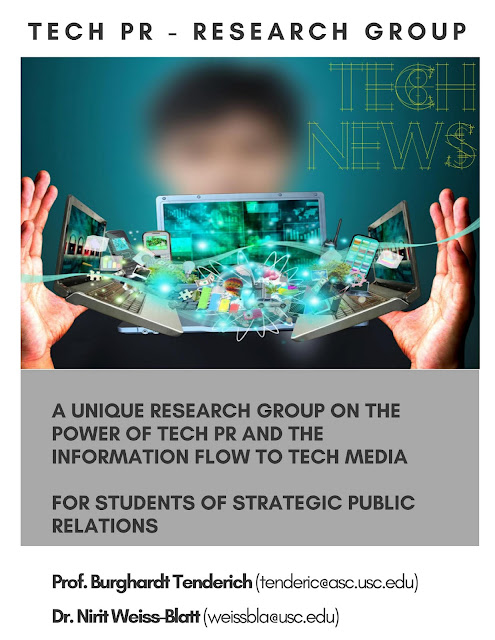 
2013: Award for "Novelty of Presentation or Ideas" at the Early Stage Researchers Colloquium organized by The Alexander von Humboldt Institute for Internet and Society in Berlin (November 21, 2013).

* 2015: Yedioth Haifa scholarship for academic excellence (of the doctoral dissertation)

* 2011-2014: Excellence scholarships for Ph.D. students from the Graduate Studies Authority, University of Haifa.

* August 2017 - Present
Visiting Research Fellow at the Annenberg School for Communication and Journalism at the University of Southern California (USC) in L.A.

The first year of post-doc was in M{2e} – Media, Economics and Entrepreneurship program.
The second & third years are in CPR - The Center for Public Relations.

* October 2016 - February 2017
Instructor. Teaching the course "Innovation Journalism" at the Technion International School, International School of Engineering, Industrial Engineering and Management.
Initiated this new course and developed the entire content of the syllabus.
Among the topics: Tech journalism, do's and don'ts of working with the media.
I gave all of the lectures to the International students and graded their final projects (startup pitch deck & media pitch).

* 2011 - Present
Research Associate at The Internet Lab, University of Haifa.

* 2011 (August)
Teaching Assistant at the University of Haifa, Faculty of Management, Department of Business Administration (MBA students), in the framework of the course: "Information and Community." Instructor: Prof. Sheizaf Rafaeli.
Among the topics: Virtual Community, Wisdom of Crowds, Interactivity, Multitasking.
Graded final papers. 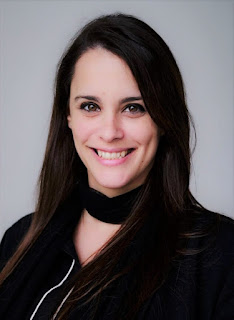 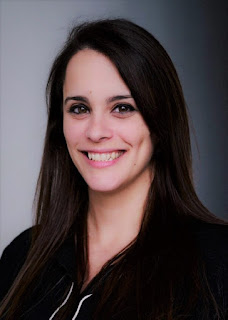 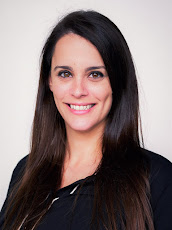 The “USC 2019 Global Communications Report” examines the impact of technology on society and the communication industry. It also provides...

Annenberg School for Communication and Journalism